In the beginning around the 1800s, Firefighters used leather buckets to control and extinguish the fire. The Firefighters were known as the hook and ladder bucket brigade. The water source in which the Fireman used came from old cisterns that were located on every corner of the town (cisterns-a reservoir, tank, or container for holding water) Firefighters had to carry or hand pump water from them, so they were able to extinguish the fire and prevent further property loss.

The old Firehouse was built on the corner of Buckeye and W. Patterson St. this building housed the council chambers, four jail cells and the fire equipment. This building was used until 1966, when the new firehouse was dedicated. The newly constructed building located on the corner of Main and W. Wayne Street, which is the place of the Fire Department and Council Chambers. 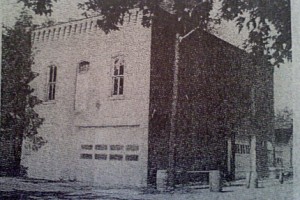 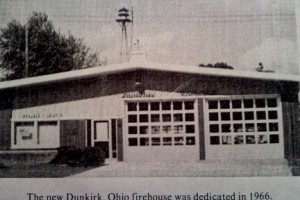 The boys from the Dunkirk Hook and Ladder Company were acknowledged for being the best in the state. This company of men which consisted of as follow: Web men- L.H. Ramsey, Obe Harmon, Chas. Steinman, Clem Everhart, and Ora Ebert; Tongue men- Wm. Johnson and Wm. Isenbarger; Stackers- Henry Bame, Julius Warner, Jesse Sigley, and Thanny Treece; Climbers- W.J. Ewing; Forman Jacob Rinehart: Chief Adam Neff. The thing that made our guys stand out from the other companies, was that they did something they called the running stack. The running stack was where they would stop the ladder wagon and pull off the ladder and with men working together they would stand the ladder straight in the air and have one guy climb to the top crossing over and returning to the ground from the other side of the ladder. This method was unheard of with all the other companies, which giving the Dunkirk Company a better time and clenching the 1887 State Title. The competition companies would stop to stack their ladders up against nearby building to do the climb, which made a slower time. 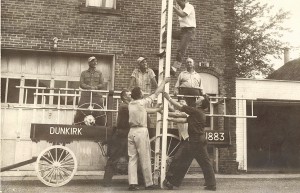